Can I Feed My Dog Ham?

You are having a delicious ham sandwich. Your pup is begging for a bite.

The begging is cute and irresistible, and you are tempted to give your dog a juicy piece of ham. Should you give your dog ham? Is it safe for your dog?

Dogs are omnivorous animals, which means they can eat both vegetables and meat.

Ham is meat. So, it should be okay to feed your dog ham, shouldn't it?

Well, the answer isn't so simple. Dogs and humans have different digestive systems.

Some human foods react differently in dogs than in people. What may be healthy for you may not be as good for your dog.

Ham is not harmful to your pup. However, you should know how much, when, and what kind of gift to give. 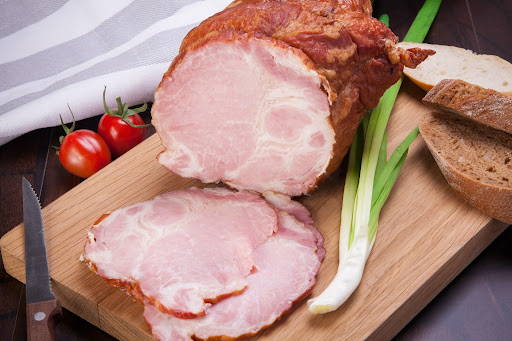 Is ham healthy for your dog?

Ham is a pork product that is cured to preserve it. It is usually purchased cooked and ready to eat. Ham has many nutrients and is a good source of protein.

A 100-gram serving of ham contains about 21 grams of protein. It also contains many minerals, including selenium, phosphorus, iron, zinc, potassium, copper, and magnesium.

Here are some of the health benefits of ham:

How to feed your dog ham 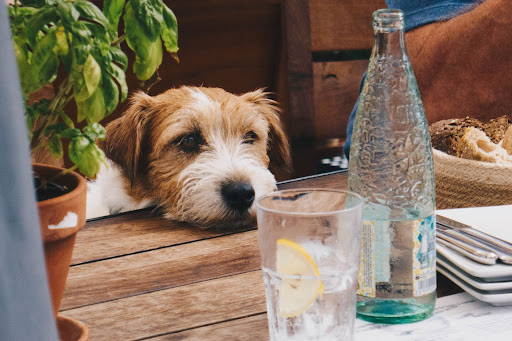 A slice of ham or two occasionally is not harmful to your dog. In fact, ham has protein, which is an important part of your dog's diet. It can be a healthy treat for your pet once in a while.

Ideally, ham should not make up more than 10% of your dog's daily caloric intake.

Your vet would be able to tell you the number of daily calories your dog should eat depending on their weight, age, and any other medical condition.

If you want to give your dog ham, pick the kind that has no or very few additives.

Ham is usually cured using salt and additives that help preserve the flavor and make it safe for eating in the future.

A diet high in salt is not good for humans, and the same goes for dogs too.

Choose a ham that is low in sodium. It may taste plainer than other types of ham, but it is a lot healthier for your dog.

Sodium isn't the only thing that could be bad for your dog. Ham may also contain preservatives that are loaded with nitrites and nitrates.

These could cause serious side effects in dogs. Sometimes, it may even be toxic

A diet high in sodium could cause symptoms such as diarrhea, vomiting, and lethargy.

In severe cases, it may also cause seizures and kidney damage.

When giving your dog ham, make sure to never give them ham bones. When you cook ham bones, they become soft. If your dog chews on them, they may splinter and hurt your dog's mouth.

If the dog ingests these splinters, it may even cause damage to its internal organs.

In extreme cases, it could even cause death. Raw ham bones may also contain bacteria that could be dangerous to your dog.

You should also avoid giving your dog ham hocks because they could be a choking hazard.

Some dog foods and treats made with ham are:

How much is too much ham? 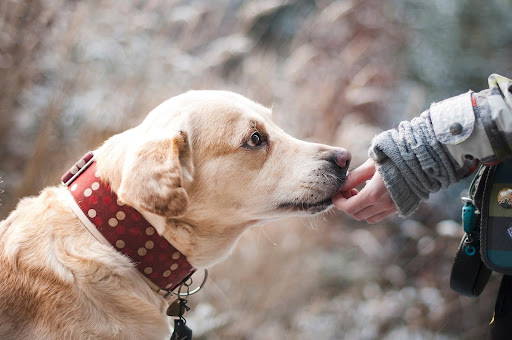 Ham, when given in small quantities, is not bad for your dog. So, what is the right amount of ham for your dog? How do you know if your dog has had too much?

It will depend on the size of the dog, and more importantly, the health of the dog.

Most dogs can tolerate a little bit of cooked ham every now and then.

However, if your dog has a pre-existing medical condition or a sensitive stomach, even a small piece of ham could have negative results.

When feeding the dog ham, pet owners should be mindful of the following symptoms:

These symptoms indicate that ham does not agree with your dog. You should consult a veterinarian immediately.

Ham, in large quantities, can be dangerous for your dog. Due to its high salt and fat content, ham can cause gastrointestinal and neurological problems. It can also cause medical issues such as:

Eating large amounts of salt can cause poisoning in dogs. Even 1 gram of salt (sodium chloride) per 1 pound of body weight can lead to toxicity.

Ham can be cured in different ways. Sometimes, it may contain as much as 2 grams of sodium per cup of meat.

Say, you have left out ham leftovers on the counter. If your 20-pound dog eats those leftovers, it may ingest too much salt and risk salt toxicity.

Have you ever felt sick after having a heavy meal?

Ham has a high-fat content, which can cause your dog's stomach to get upset.

Your pup could even have bouts of vomiting, diarrhea, and loss of appetite after having even small amounts of ham.

If these symptoms persist for 24 hours or more, you should take your dog to the veterinarian.

A diet high in salt can have negative effects on your dog's health.

Your dog may not suffer from salt toxicity, but high amounts of salt can lead to heart disease, high blood pressure, and kidney problems.

Feeding your dog excess calories can make him pile on the pounds.

Obesity puts dogs at a higher risk of diseases, such as heart disease, osteoarthritis, diabetes, and even cancer.

Keep your furry friend at a healthy weight by feeding them low-fat snacks and healthy meals.

Ensure that the treats account for only 10% of their daily dietary requirements.

Pancreatitis is a painful condition in which the pancreas gets inflamed. A diet consisting of fatty foods is one of the common causes of pancreatitis.

Dogs with pancreatitis exhibit symptoms like vomiting, loss of appetite, diarrhea, lethargy, and pain in the abdomen.

If it is mild, your dog may feel better with oral medication and hydration. However, severe cases require aggressive treatment.

Your pet may need to be hospitalized and given antibiotics, intravenous fluids, pain medication, and nutritional support.

Pancreatitis and obesity increase the risk of diabetes in dogs.

Here are some other proteins for dogs 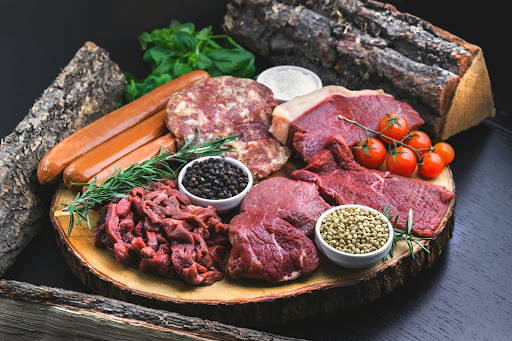 Dogs require protein for healthy growth. Choosing the right protein for your furry friend is important because some meats offer more nutritional value than others.

Different meats may also have different tastes and smells, and that may influence how willing your dog is to eat them.

Before you give your pup new foods, it is a good idea to consult with your vet.

They will be able to guide you as to how much protein you should give your dog.

Some other proteins that you can give your dog are:

Whatever meat that you give your dog, ensure to cook it well. You should never serve raw or undercooked meat to your dogs.

You can even feed your dog ground meat.

Eating ham in moderation can be beneficial to your dog.

When giving your dog ham always keep an eye on the quantity you are giving.

If your dog has an adverse reaction to ham, take them to the vet immediately.

Check Out 10 Frequently Asked Questions About Dogs and the essentials for your dog at Paws & Pup.